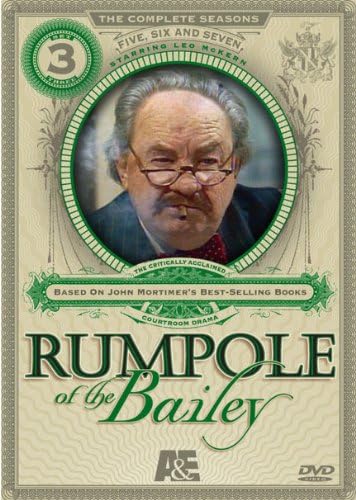 The three final seasons of RUMPOLE OF THE BAILEY- the standard-setting courtroom drama from the brilliant mind of Sir John Mortimer, based on his celebrated and best-selling books of the same name.

Opinionated and set in his ways, the portly and curmudgeonly Horace Rumpole powers forth in his daily quest for justice. Unfailingly disheveled and as fond of "plonk" as he is of the English language, the beloved barrister asks only one thing of the accused--never plead guilty. For it's only a matter of time before the unflagging Rumpole cuts through society's hypocrisies and gets to the truth--as well as the heart--of the matter.

A timeless mixture of comedy and drama, this 6-disc DVD set contains all 18 episodes broadcast during the fifth, sixth, and seventh seasons of RUMPOLE OF THE BAILEY, adapted by Sir John Mortimer from his best-selling novels, and starring the esteemed Leo McKern (A Man for All Seasons).